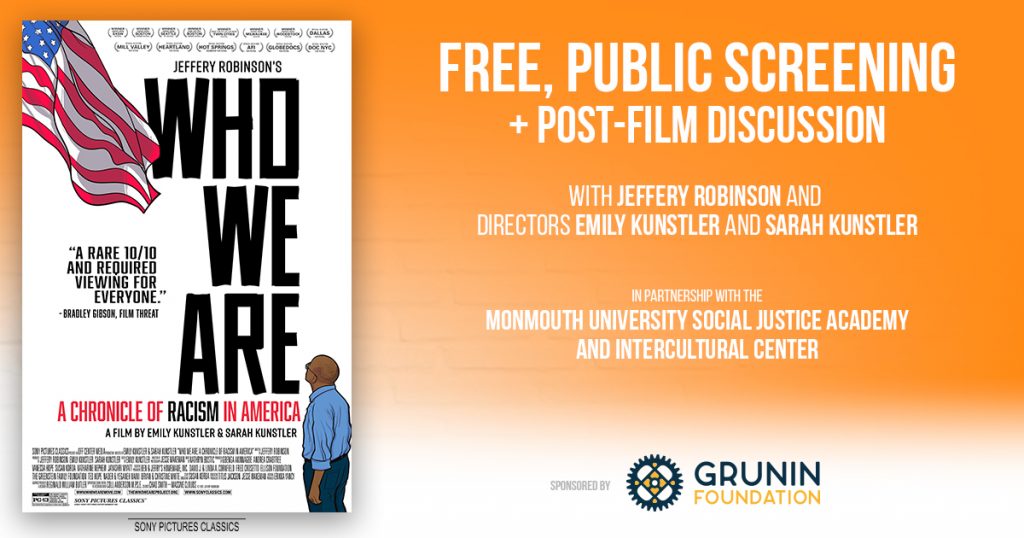 BASIE CENTER, MONMOUTH UNIVERSITY SOCIAL JUSTICE  ACADEMY & INTERCULTURAL CENTER TO HOST SCREENING OF ‘WHO WE ARE: A CHRONICLE OF RACISM IN AMERICA’

Documentary’s subject, directors will be on hand for live, post-screening discussion

The Count Basie Center for the Arts Diversity, Equity and Inclusion Task Force, in conjunction with Monmouth University’s Social Justice Academy and Intercultural Center, will host a special screening of the new Sony Pictures Classics documentary Who We Are: A Chronicle Of Racism In America at 7PM on Tuesday, February 15 at the Count Basie Center’s Hackensack Meridian Health Theatre, 99 Monmouth Street, Red Bank.

The screening, which is free and open to the public, will be followed by a live discussion with directors Emily Kunstler and Sarah Kunstler, along with former American Civil Liberties Union Deputy Legal Director Jeffery Robinson, whose presentation and research on anti-Black racism and white supremacy in America provides the focus of and narrative the documentary.

“Who We Are is a powerful and frank film which forces the viewer to confront not only America’s racial biases, but perhaps their own,” said the Count Basie Center’s Jennifer Lee, a member of the organization’s Diversity, Inclusion and Equity task force, who has seen the film and led coordination of the February 15 screening. “This film demands to be seen, and the Basie embraces its role to help facilitate that opportunity.”

“At its core, Who We Are delivers a truth-telling narrative aligned with the purpose of Monmouth University’s Social Justice Academy, to combat racial injustice and foster educational equity,” said Academy Director Dr. Nicole Pulliam. “I look forward to continued partnership with the Basie as we continue to engage educators and the community at large in social justice work through the arts.”

“Hearing Jeffery Robinson’s talk changed our lives,” said director Emily Kunstler. “We look forward to sharing the film in Red Bank on February 15, and participating in a conversation on how Americans of all races can reclaim our Nation’s history together.”

ABOUT WHO WE ARE: A CHRONICLE OF RACISM IN AMERICA

In Who We Are: A Chronicle of Racism in America, Robinson faces his largest audience, asking all of us to examine who we are, where we come from, and who we want to be. Anchored by a 2018 performance by Robinson at New York City’s Town Hall theater, the film interweaves historical and present-day archival footage, Robinson’s personal story, and vérité and interview footage capturing Robinson’s meetings with Black change-makers and eyewitnesses to history. From a hanging tree in Charleston, South Carolina, to a walking tour of the origins of slavery in colonial New York, to the site of a 1947 lynching in rural Alabama, the film brings history to life, exploring the enduring legacy of white supremacy and our collective responsibility to overcome it.

“Knowledge is power,” Robinson says in a statement accompanying the film. “A false narrative about the role of white supremacy and anti-Black racism in America has led to our failure to make significant, lasting progress on the issue of racial justice. Knowledge can change people’s views, people’s opinions, and their behavior. I never saw this as a question of whether I would make this information public, but how I could do it in the broadest way possible.”

For more information on the film, and Robinson’s Who We Are Project – an outgrowth of the presentation detailed in the film, visit www.thewhoweareproject.org.