Walking tours and historical sites. Red Bank has a lot to offer fans of history. 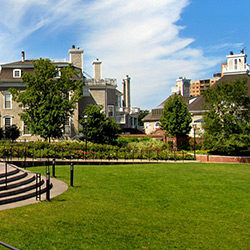 Designed by Red Bank architect Jerome Larsen and completed in 1990, this condominium complex retains and celebrates Red Bank’s Victorian architecture. Its centerpiece is the 1868 Hubbard House (the one with six windows across the second floor façade), a fine example of Second Empire style. 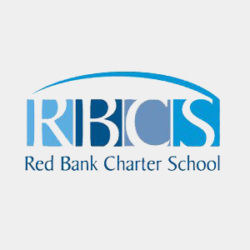 The Second Empire style house was originally built at 81 East Front Street in the 1860s by William W. Conover. Conover, a real estate investor, was such a strong abolitionist that he was nicknamed “Black Bill.”

The house later became part of Riverview Medical Center as was called the “Century House.” It was purchased by the Charter School and moved to Oakland Street on April 2, 2006, a date remembered for the “move of a Century” that closed downtown Red Bank for most of the day. 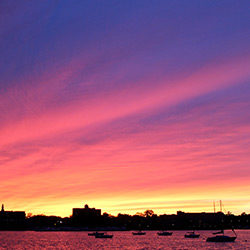 The structure was built by the State of New Jersey in 1999-2000 with the active involvement of the Borough of Red Bank and the Township of Middletown. Not only is it a beautiful structure, it was completed more than a month ahead of schedule and under budget, a remarkable feat of civil cooperation. It boasts two accessible walkways and bicycle paths, and is considered a model of context-sensitive design. 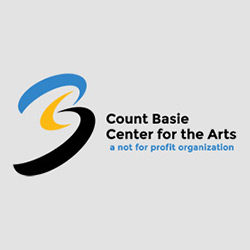 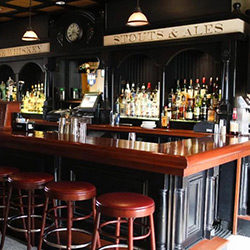 The Robert Allen house was originally built on Broad Street by Robert Allen. His son-in-law George Hance Patterson, moved it to its current location in 1905. The fine Second Empire style residence was converted to retail use in 1971. 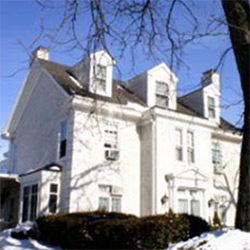 Sigmund Eisner bought this house in 1906 from Professor Starr who ran a boys’ school here. Eisner, who owned a large uniform-manufacturing company, renovated the Italian-style frame villa and covered it with stucco in 1921. His heirs donated the building to the town for a library in 1937. It has been extensively renovated, most recently in 2007. The reading room boasts a beautiful view of the Navesink River. 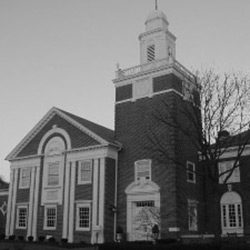 The center portion of the church building is all that remains of the fine Georgian Revival house built by J. Lester Eisner in 1916. 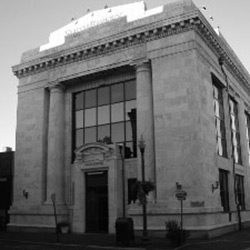 This fine white marble Neoclassical building was designed by the New York architect Warrington G. Lawrence for the First National Bank. But the Red Bank Trust absorbed First National before opening the doors to their new head office in 1914. 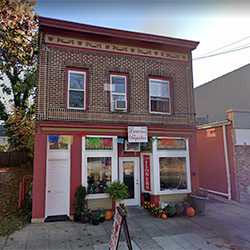 Johnny’s Jazz Market reflected owner Ralph John Gatta’s passion for jazz. The neighborhood store was opened in 1944 by his father, and Gatta was the proprietor since 1963. He passed away in 2010. There was always jazz playing on the stereo and informal memorials marked the passing of each great musician. 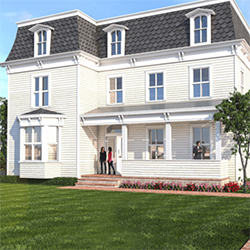 T. Thomas Fortune was an influential publisher, militant newspaper editor, writer, and organizer at the turn of the 20th century. He set standards
for integrity and professionalism in African American journalism.

The TTF Committee is on their way to restore the house, and create a Cultural Center dedicated to diversity, advocacy, & tolerance, which will have a ​vital role in the town, the county, and the state.

The T. Thomas Fortune House is one of the most historically significant properties in the United States. It is one of only two National Historic Landmarks (NHL) in New Jersey that is significant because of its role in African American history. 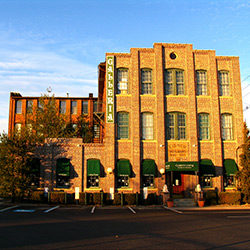 Built in 1903 as the Sigmund Eisner Co. factory, making clothing and uniforms, the original building was larger, especially during the boom years of World War II, when the company had military contracts. The remaining structure was developed into The Galleria shops and offices in the 1990s. 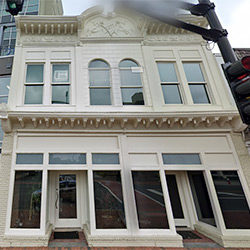 Look up and you’ll see the date “1893” inscribed on the fancy relief work of the breakfront cornice on this Commercial Italianate building. It originally housed Mr. Lamb’s wine and liquor store. 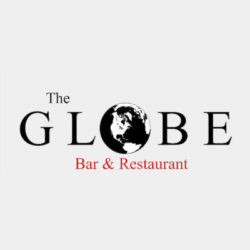 Built in 1840 as a residence, the Globe Hotel grew in size and popularity after its conversion to a hotel in 1844. A 1936 fire left only the bar and restaurant intact. Now a favorite for burgers and beers. 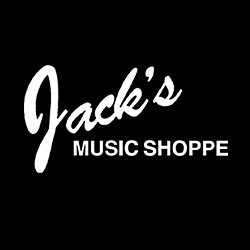 First opened across Broad Street (where Ashes Restaurant is now) in 1970, Jack’s Music is owned by Red Bank native Jack Anderson and provides everything a musician or music lover needs, from CDs to oboe reeds to concert tickets. The store occasionally hosts musical events, and has been mobbed during record signings by Springsteen or Bon Jovi, both local residents. It was used as a location for Kevin Smith’s movie Chasing Amy, and as “Brodie’s Secret Stash” in Jay and Silent Bob Strike Back. Check out the mural on the outdoors back entrance. 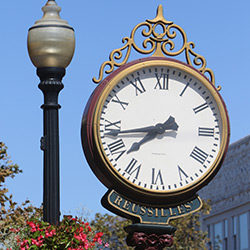 Leon de la Reussille, a native of Switzerland, installed this clock in front of the jewelry store he opened in 1902. Reussille was inspector of clocks and watches for the Central Railroad of New Jersey. 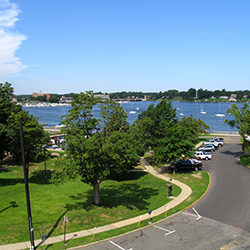 This waterfront park is a splendid place to picnic and watch the river. During the summer, kids go crabbing here. The park also hosts concerts and festivals.

During its early years, Red Bank was an important river town. Farm produce, wood, and seafood were sent to New York, returning with cargoes of manufactured goods and beer. The steamships Sea Bird and Albertina graced the Navesink in the mid-19th Century. The passengers often moved to Red Bank permanently. In 1840, a writer noted that Red Bank “is the most rapidly increasing village in the state except for Keyport.”

Irwin’s Yacht Works, to the north of the park, has been in operation for more than a century. 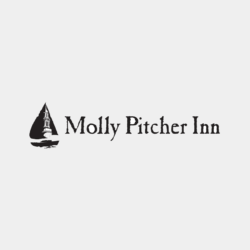 This splendid hotel overlooking the Navesink River was built in Colonial Revival style in 1928 and updated in the 1990s. Today, it is undergoing further expansion. The “Molly,” as it is called locally, is a favorite spot for dining, meetings, and events.

The hotel is named after the legendary Molly Hays, a heroine of the Revolutionary War. In July 1778, in sweltering heat, the Irish-born Molly earned her nickname by carrying water to the cannoneers in the Battle of Monmouth. When the battle flared, Molly stayed at her task although the other women had all fled in fear. Some say Molly even took command of a cannon after her husband, Joseph, fainted from the heat. 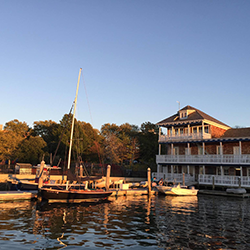 The Monmouth Boat Club house was built in 1879 in Shingle Style. The porches on each of three stories make it easy to catch a breeze while watching a regatta.

The MBC was founded as a rowing club, but its activities have expanded to include fleets of several kinds of watercrafts. While it is a private club, run by its members, it extends reciprocal hospitality to visiting members of other yacht and boat clubs, including temporary docking privileges. 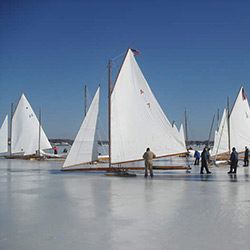 The North Shrewsbury Ice Boat & Yacht Club was founded in 1880, in the back room of 3 East Front Street, moving in 1923 to the grounds of the Monmouth Boat Club. Ice boating is an exhilarating sport, with its practitioners avidly awaiting a hard January freeze on the Navesink. The ice boat itself, a graceful craft, is one of Red Bank’s favorite symbols. There is friendly rivalry with Poughkeepsie, New York ice boaters over which club is the oldest. 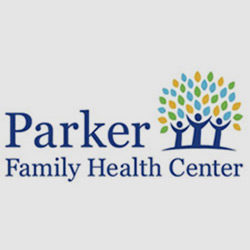 Opened in 2000 to meet the needs of underserved members of the community, the Parker Center is staffed by volunteer medical professionals. It was organized by Dr. Timothy P. Sullivan and Dr. Eugene Cheslok, both associated with Riverview Medical Center. Uninsured patients receive medical care without charge.

The building was designed by S.O.M.E. Architects of Red Bank. For the first few years of its existence, the clinic operated out of a trailer donated by the Patock Construction Company.

The clinic is named after the several Dr. James Parkers, all members of the same African-American family, who have served the people of Red Bank’s East Side for generations. 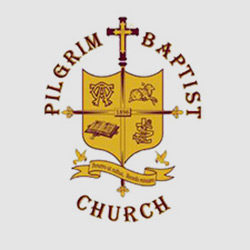 One of Red Bank’s first “Negro” churches, Pilgrim Baptist was organized in 1896. The church purchased its present home in 1955. The vital congregation supports a renowned vocal ensemble. The interior of the church boasts beautiful stained glass windows, and a mural by Karen Swenson Todd, commissioned by the church in 1993 to celebrate the congregation’s 150th anniversary. The mural shows the history of the congregation and highlights of the region’s history, and is rich in symbolism. 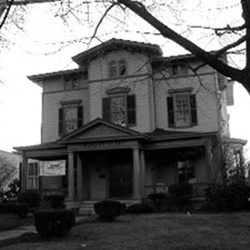 A fine Italianate residence designed by the architect J.P. Huber and built by Anthony Reckless, founder of the New York and Long Branch Railroad. 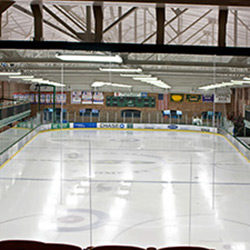 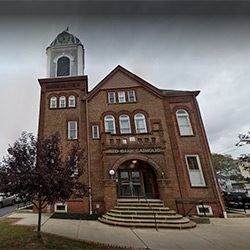 RBC’s Cultural Center inhabits a building that was the Shrewsbury Township Hall when Red Bank was the government seat for Shrewsbury.

The Romanesque Revival structure was designed by Robert D. Chandler, a local architect, and built in 1892. When Red Bank was incorporated as a borough in 1908, the building was used as the Borough Hall, and later as the Police Station. It fell into disuse after the Borough Hall moved to 32 Monmouth St. in 1958.

The monument outside it is called Handing Down Old Glory. Made of Vermont granite by sculptor Frank J. Manson, it was dedicated on May 30, 1926. The sculpture was a gift from the Red Bank fire departments in memory of fallen soldiers. The figures are portraits of Henry M. Nevins (center) in a Civil War uniform; an unidentified soldier in the uniform of the Spanish-American War (on Nevins’ right); and Major Peter P. Rafferty in Spanish-American War uniform (reaching toward flag). 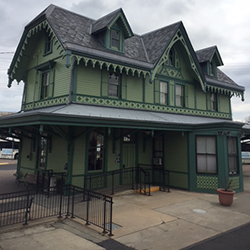 Red Bank’s distinctive Station House is one of the last remaining examples of the Stick Style station houses built by the New York and Long Branch Railroad in the 1870s. (The NY LB line was later taken over by the Central Railroad of New Jersey.) This distinctive depot was opened on June 24, 1975. It has been renovated and restored several times, and now belongs to New Jersey Transit.

The building of the railroad in the 1860s and 70s brought increasing numbers of visitors and settlers to Red Bank, and ended dependence on steamboats for transportation.

When England’s King George VI and Queen Elizabeth visited Red bank on June 10, 1939, they arrived by train. They then traveled by motorcade to Sandy Hook to board a naval warship for their visit to New York.